I Haven't been idle!

Back again just to prove that I haven't been idle! Yesterday evening I made these 3 simple gift money holders for my nephews so that I could post their Christmas presents. I had made some gift card holders for my nieces as we sell gift cards in the Post Office - yes it is a plug!! I have always given my nieces and nephews (great) a book token since they were very small. But now the eldest is 18 and at uni and the youngest is 14 so I thought maybe a gift token would be more useful! Snag is my 3 great nephews live on the Isle of Lewis and even though the gift tokens are valid in a vast range of places I don't think they would be much use in Stornoway lol! I had a Christmassy gift card holder and just altered another card for my nieces but had to make something for the boys. Now as we all know boys are difficult to make cards for so I wondered what to do. I found these ovals from Craftwork Cards and realised that they would be ideal. Just a small deckle edged card and the image coloured and matted onto white card which had been embossed in the cuttlebug and matted on red card. I made a little pocket on the inside with some red DP and stamped a House Mouse "To: From:" image and stuck it inside too. I think it worked out ok and looks quite effective. Need to make some more for my own kids too.

Too complicate things my middle nephew is 16 on Christmas eve. I had a brainwave that I would use one of the Mikey downloads that I got from Charmed Cards and Crafts in July when my youngest nephew had his birthday. I thought it would be quicker to use a ready coloured download. Mistake!!!! I spent ages looking for DP to go with the image. Eventually I found these papers and I hope the card is ok LOL!!
I almost forgot that I am entering this card in the Cupcake challenge which is for a 5x5" birthday card. 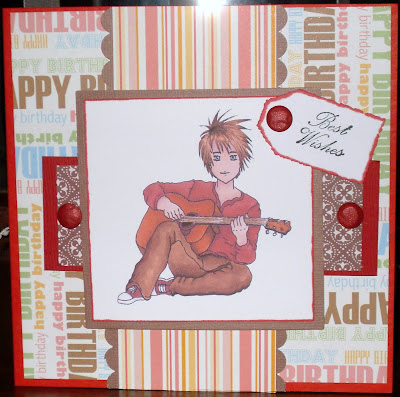 I also had to make gift card holders for Poppy and Oliver. This is the one I made for Poppy. You might recognise the image from the gift tag I made for the TG challenge for this week! 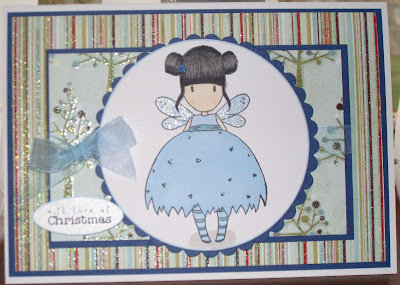 As you can see it is very like her Christmas card. It's a little smaller and doesn't have as many embellishments.

And this is the one for Oliver. I had already done this one for challenge a wee while ago.

I posted most of my cards yesterday. And yes it was the last day for 2nd class mail!! I was so busy at work that I was having bother getting the last of them signed. Of course I hit one or two snags. I went to put my cousin's card in the envelope and discovered that it didn't fit. So next year I need to send them a square card cos I've got an envelope with their address label on it. But my best was when I opened my brother's card to sign it and discovered that I had put the insert in upside down. So I had to take it home and sort it. At work I have 3 to hand out and 3 spare!! I think I'll make the gift money holders now and think about my husband's, son's and daughter's cards tomorrow. It's been a long time since I've read the papers properly. The other night I read the births and death's in my two papers for about a week just so I could put them in the re-cycling bin lol!

By the way if anyone read yesterday's post where I said we didn't have much snow - I was wrong. It came on about 1pm and by the time I went to work at 1.45 there was quite a lot lying. I live on a minor country road which tends to drift so today coming home from work at 12.30 was not a lot of fun. This is the sort of weather when I miss my Freelander. Thank goodness Volkswagens are really good in snow. A VW Golf is not very big but it sure can go through snow.