Hi everyone, I hope I'm speaking to you on Saturday morning! It's very wild and windy here (Friday evening) and I can't get online on my laptop! I'm bit reluctant to try adding a photo of my card as I added one on my DT post and it ended up sideways!!

This week at Totally Gorjuss our theme is "Snow's The Way To Go." This should be easy, shouldn't it? After all we're all busy making our Christmas cards just now aren't we?
Here's what I made this week. 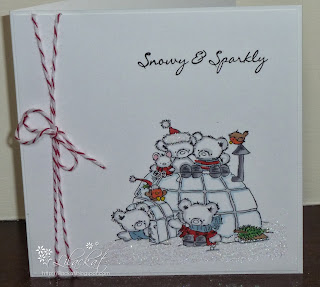 Hope I can get online sometime before this posts as I'm pretty sure this photo will end up sideways too. It did but I managed to get online when I should have been leaving for work!

I've used a sentiment and the cute Igloo Bears image from LOTV. Simply coloured with Promarkers and finished with some bakers' twine. We're sponsored by the lovely people from . I'm sure you'd all like to have a browse around their online store!

I've got an all day class today - at least I would have if I didn't have to work in the morning lol! So I'll have to miss half of it but hopefully I'll get the instructions for the cards I miss.

Have a lovely weekend everyone and thanks for looking.

- Posted using BlogPress from my iPad
Posted by Kat at 09:00 6 comments:

Good morning everyone, Saturday again! I don't know about where you are but it's been very cold here this week. Our knit and crochet group was cancelled on Tuesday because the roads were so bad. So I decided I might as well go to work and have the afternoon off for the next meeting. I thought the organisers were being unneccessarily cautious till I went out to go to work and discovered how slippy the roads were! The afternoon postie confirmed how bad the road was between us and the nearest village so I think it was probably right if a bit of a disappointment to cancel the meeting.

Enough waffle! At Totally Gorjuss this week our challenge is "Child's Christmas." And of course it doesn't have to be a card, it could be a present. Hope you can join us as we have two sponsors this week, Bugaboo and The Ribbon Girl so you have two chances to win.

Here's what I made quickly - since I didn't have a lot of time. As usual! 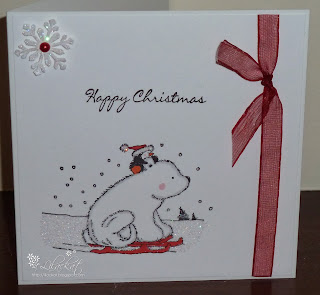 Thanks for looking and hope to see you over on the challenge blog.

No not for me, I'm past being excited about my birthday lol. It's Poppy's birthday tomorrow and she's very excited about it! She'll be 6. Seems like five minutes since we waited days for her to finally appear about 12 days late. Seems to be a habit with Catriona's children. Oliver's birthday was on the 9th and he was 12 days late too!

Since Poppy is a very girly little girl and does ballet and likes dolls (unlike her Mum) I thought this sweet LOTV image was perfect for her card. I finished off with some ribbon, punched butterflies, pearls and lots of Glamour Dust. Nearly forgot the sentiment's from Stampin' Up!. 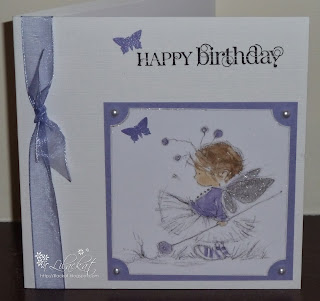 Hope she likes it.  Hope you like it too!

I sent her a pink, fluffy leapord print (?) onesie from M&S. Think I'll be popular with her. Oliver certainly loved his dog onesie. He had it on as soon as it arrived lol!

I'd best go and schedule my DT post for tomorrow while my broadband is working. But that's another story!

Thanks for looking and I hope you can find time to tell me what you think.

Good morning everyone. I'm writing this on Friday afternoon before I go to work while I can get online. I'm sure you're all fed up hearing about my broadband problems so I'll just say that Orange mobile broadband works here but it can be a bit temperamental!!

This week at Totally Gorjuss We'd like you to use 3 patterned papers on your card or project. Easy! Even I can do that. I admit it wasn't easy after so many CAS cards recently but these pads of LOTV papers are so easy to use as they all go together that I think I managed! 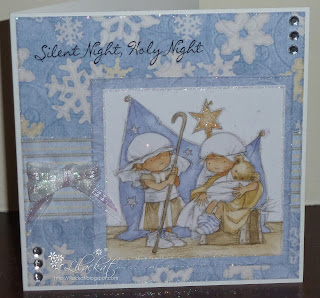 Have a lovely weekend everyone, catch up later.

Thanks everyone who takes time to leave a comment. 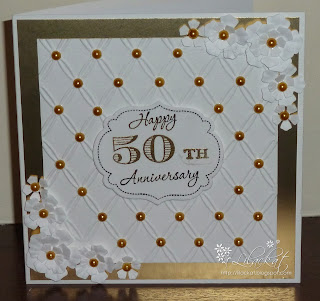 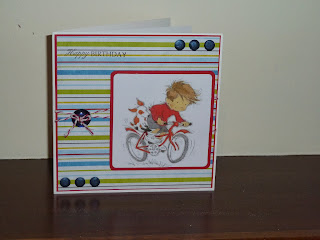 Good morning everyone. I've got my fingers crossed here so it's not easy to type lol! I've reluctantly changed my broadband supplier. I couldn't cope any longer with hardly being able to get online! I've gone for Orange mobile using a dongle. My daughter has had Orange mobile for quite a while. She doesn't have a landline, she doesn't see the point!

This week at Totally Gorjuss our theme is "Remember." Quite appropriate for this time of year but I'm sure you can put your own spin on it. I've used a favourite stamp and kept my card very simple. I just coloured the stamp with markers and didn't add any more colour to the petals or leaves.

Here's what I made. 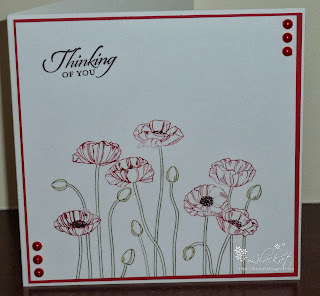 I used :-
Image :- Pleasant Poppies from Stampin' Up!
Coloured with SU markers in Real Red, Always Artichoke, Old Olive and Basic Black.
Sentiment :- from the Wetlands set from SU.
Pearls.

I've hardly been around the challenges for ages so I've no idea what's going on out there. I'll check up this afternoon after work.

Today is my grandson, Oliver's birthday. I can't believe he's 4 already! Poppy will be 6 in a fortnight's time. Every time we see her, which isn't very often, she's trying to read everything she sees. Doesn't seem long since her Mum was the same. Catriona loved to read when she was little.

I hope you can join us this week. Crafters' Companion are sponsoring us this week and I'm sure they've got lots of bargains to tempt you even if you don't win the prize.

I've been so busy this week I forgot to show you the other Halloween card and the boxes of Halloween sweeties I made for Poppy and Oliver! 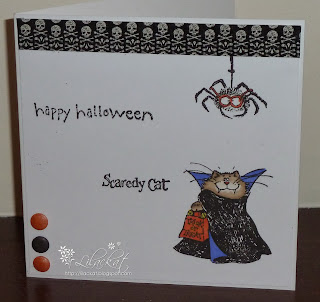 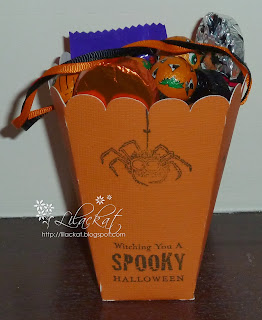 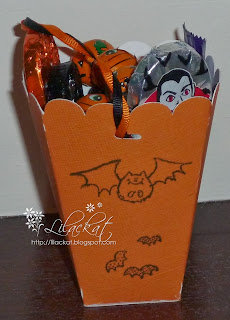 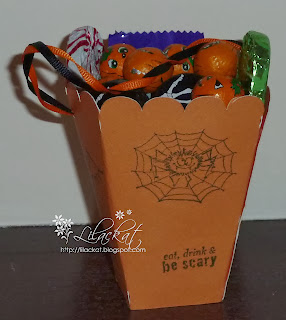 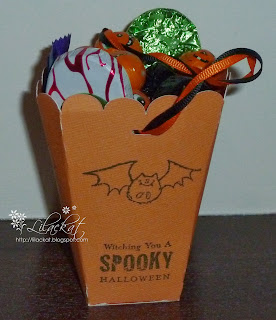 I'm hoping that this new mobile broadband is going to be a success. So far it's working pretty well, sometimes even better than my previous supplier. I've got a couple of other cards to show you when I've got a minute to blog them.

Thanks for looking and I'd love to hear from you if you've got a minute to spare.

Totally Gorjuss 208 - Anything Goes Plus Snow.

Good morning everyone and time for another challenge at Totally Gorjuss. This week we'd like to see "Anything goes plus snow." This suits me perfectly as I'm really trying to get on with my Christmas cards just now. This week we're sponsored by Craft All Day so don't forget to give them a visit.

This week I have another simple card using a gorgeous LOTV image. 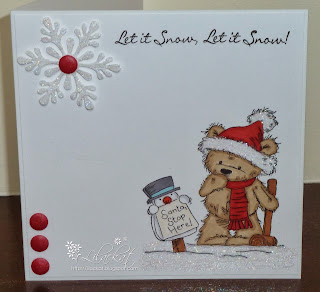