I don't think this is exactly my finest hour. I decided to try the Just Magnolia challenge which is paper pleating. I followed the tutorial which was very clear but maybe it would have been better if I had practised instead of just jumping straight in. I have used red mainly which fits the Daring Cardmakers challenge. I followed the sketch from Stamp Something which I think goes well with the image. I think the card is "girly" enough for the Cupcake challenge and it is a birthday card which fits the Pink Elephant challenge. 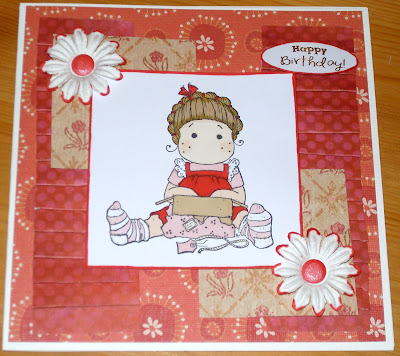 As I said probably not my best card and certainly not a good photo. I have just never got out of the bit all day. My husband had the day off today as his boss died of a massive brain haemorrhage yesterday and everyone was given the day off. He was the sort of boss who knew everyone who worked for him - and there were a lot of them. I think what bothers a lot of them was that he was a similar age to a lot of them! Since the roads around us are a bit better, still quite thick ice and a lot of water but an improvement, I went to buy a present for a friend's granddaughter and some more double sided tape! But I seemed to spend a lot of time just faffing about catching up on blogs before I thought maybe I could do a couple of Friday challenges. Tomorrow I need to shift myself and get my DT card done for Totally Gorjuss.

See you tomorrow, I should try to comment on some of the entries for the TG challenge now and maybe have a nice cup of coffee at the same time.