This afternoon I have been making a card for a few challenges. I think I might make a couple of cards and then get on with my DT cards so that I've got them done in plenty of time!

I followed this nice simple sketch from The Pink Elephant challenge and ended up with a Christmas card! I stamped the bell and the holly on white card and then stamped them again on gold and white respectively and the clapper on red. I won these stamps ages ago when Kath had some blog candy and at last I've managed to use them. I decoupaged the bell, the clapper and the holly. Please don't ask why I decoupaged the holly, it nearly drove me loopy. Ever tried to cut out something as small and awkward as this? Believe me don't even go there lol!!

I also used Nesties, a Martha Stewart punch, Promarkers, the Cuttlebug snowflakes embossing folder and Stickles. The DP is Cosmo Cricket - Jolly by Golly and the sentiment is from Craftwork Cards and it is edged with a gold inkpad. 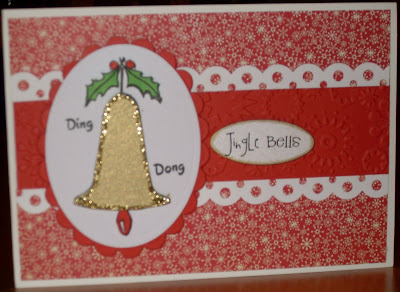 I might be pushing my luck with the Daring Cardmakers challenge but the holly has points and if you like so do some of the snowflakes! I've kept the card quite simple as it is quite a small card and I think it would be a bit crowded if I had added anything else to it.

And that's it really, nothing else I can say about it really. I'm off to see if I can do anything else before I "need" to do my ironing.