Hi everyone, hope you've all had a good weekend. I was at a crop yesterday and managed to make 2 whole cards. I'm not usually so productive at a crop. I usually still have finishing touches to do but not yesterday! And this is me just getting round to posting. 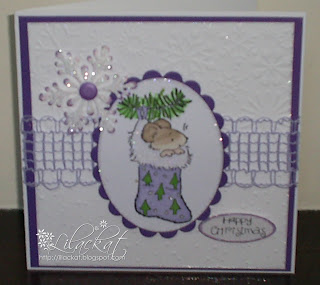 I used :-
Image :- Penny Black.
Sentiment & Card Candi :- Craftwork Cards.
Colouring :- Promarkers.
Glamour Dust, Nesties, Cuttlebug embossing folders, Martha Stewart snowflake punch,
raffia ribbon from stash.
I'm entering the following challenges :-
One Stitch at a Time :- Anything Goes.
Penny Black at Allsorts :- Free and Easy.
I got involved with doing something else this afternoon. We've been doing a lot of fundraising at our church recently for repairs. We've had wet rot, dry rot, needed new windows and now there is scaffolding up at one of the corner towers. We've had the usual fundraisers - quiz, sales tables, marmalade sales, just the usual things and more to come. Someone found lots of old communion tokens and thought people might like to buy some. They range in age from 1700 to 1844. I've never even seen a communion token before as since I joined the church only cards were given to members by their elders and now not even that. Not sure if this happened anywhere else or if it is just a Scottish thing or even if it was just the Church of Scotland or other Presbyterian denominations too. A friend who is an experienced cardmaker was asked to round up some other cardmakers and organise some suitable packaging for the tokens so we could sell them to anyone who was interested. Unfortunately my friend suffers from M.E. and is often too tired to do very much. She's made a couple of samples up so I have these plus the materials need to make about 40 cards. Card has been printed with a picture of our church and paper with inserts telling a bit about the tokens. So I have been sidetracked this afternoon trying to sort out some of the bits so I can make a card. I need to ask another friend to borrow a couple of her nesties as it would be easier with two sets. Doesn't make sense just now but when I get a card made I'll let you see and all should become clear!!

I'm off to schedule another post now and do my ironing. What an exciting life I lead lol!

Thanks for looking and I'll catch up with you all later.

Labels: One Stitch at a Time, Penny Black at Allsorts