Thanks everyone who left suggestions about where I could find some golf images. I've had a look at them all and taken a note of the ones I like best. I liked the male ones and if my colleague likes the one I've made for her Mum she might want one for her Dad who is never off the golf course.
The day after I wrote the post asking where I could find golf images I suddenly realised when I was brushing my teeth that I had a Popcorn Bear golfer image. I think I used it to make a birthday card for my uncle's 90th birthday in 2010. I had a bit of a panic when I couldn't find it. Thought maybe I'd given it away but it was in a drawer I don't often open lol!
So here's the card I made with it. It's not very exciting so I hope she likes it! I hope she doesn't mind the bow as this card will obviously need a large stamp. The 2 I sold on Monday will both need a large stamp. The male one only had a small knot in the ribbon but that's all it needs to stop the envelope going through the letter slot. I'll need to think after this if anyone asks for a card. Belinda probably won't mind as it's a card for her Mum. 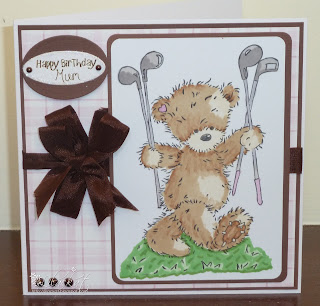 I used :-
Image :- Popcorn.
DP :- Craft Creations.
Colouring :- Promarkers.
Sentiment :- Craftwork Cards.
Talking of the difference between letters and large letters I had a bit of a run in with a customer the other day. This particular customer is an obnoxious, arrogant, know-all, little man. He asked if his envelope had enough postage so I reached for the plastic template we are supposed to use for all letters and large letters. It stuck so I told him he needed a large stamp. he accused me of not putting the letter through straight. So I did it again and told him it definitely needed more postage. So he shouted again that I hadn't put it in straight. I said again that I had but picked up the template again and showed him that the letter didn't go through. He insisted that it would so I said it was up to him if he wanted to risk it. Then he insisted I hadn't told him how much more it was. By this time the steam was coming out my ears but I managed to remain polite as I said it was another 29p and stuck the stamps on before giving him his change. If I hadn't done that he would probably have accused me of not sticking on the extra postage and keeping the 29p. As if!! He really is a horrible wee man. The kind that really makes your job worthwhile. To give you an idea of what he's like he came in the "out" door and said to the girl at the till "I thought you were dead!" She was horrified and furious at the same time but didn't bother answering. Not sure why he thought it was clever to say something like that to someone who was minding her own business and getting on with her work. If he'd said that to me he'd have got an answer. And I'm definitely not in the habit of being rude to customers, but there's always a first time!
Enough waffle now I'd best go and catch up with some DT work and see if I can get a card made for Saturday.
Thanks for looking and catch up with you all soon I hope. I didn't get a chance to get near the computer yesterday. Last night was my WRI meeting so after work I had to get my bakes ready for the teas. We had a lady showing us the Faberge style eggs she makes. They were absolutely fabulous. They ranged in size from very tiny (quail I think) to enormous Ostrich eggs. Most of them were very intricately decorated and must have taken many hours of work. We were all very impressed by her skill. I reckon I'm much too clumsy to work with eggs. I got home quite late as she could certainly talk!﻿