Hi everyone, me again! Not like me to post as often as this, I think I'll probably slow down soon! It's my turn for the teas at the WRI on Wednesday so I'll need to bake this afternoon. I have some Christmas cake so that'll do for one thing. I always make carrot cake and meringues and Baileys Rocky Road so that's another 3. I'm going to make shortbread and mince pies so that should be enough choice. My friend doesn't bake so we've been put together and she'll do sandwiches. We always do the teas in pairs and quite often you do half baking and half sandwiches each but it does depend on what you both agree. Our meeting in January last year was cancelled because of the weather but looks like we'll be ok this year.
Last night I decided to try to make another card and this is what I came up with. 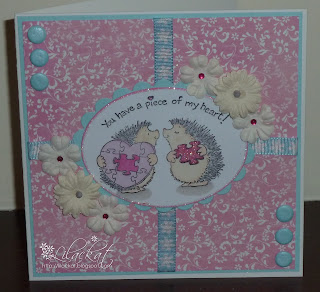 Hmm this could be a Valentine card for hubby. Not like me to be so organised. The next think I know I'll be making his birthday card. His birthday is in February and so is my son-in-laws. One on the 24th and one on the 25th.

Thanks for looking and I'll catch you all later when I've got my baking done.