Hi there, I'm still having problems with internet access so I'll make this short so that I can try to do some catching up!
This is the card I made for Oliver. Can't believe he'll be 2 on Wednesday and then Poppy'll be 4 2 weeks later. The card is quite simple and easy to make but it looks quite impressive. My friend, who knows who she is, showed me how to make this style of card and I made this one as I thought it would be good for a boy card. I've left it very simple as it's for a boy and I don't think he'd be fussed about a lot of extra embellishments on it.
This is the front of it. 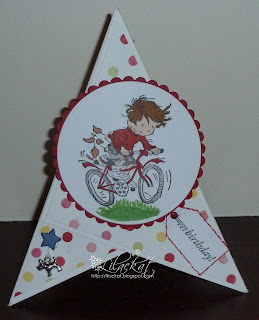 I wrote a message on this side. 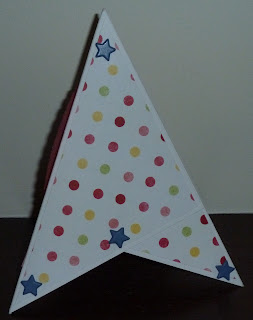 It fastens together here with the red star brad. 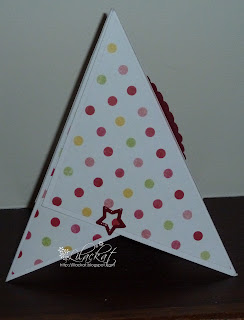 Image :- LOTV.
Colouring :- Promarkers.
Sentiment :- Penny Black.
DP :- Bo Bunny.
Tag punch, star brads.
Hope he likes it, probably a bit young to care though!!
I decided to post the card and present today but nothing'sever that simple is it? When I went to work this morning my monitor had an orange flashing light and wouldn't switch on. After I'd been on the help(?)line for more than ten minutes they said an engineer would be out within 4 hours. Sure enough he was and quickly repaired the monitor but I didn't log on till 10 to 12. Not that I had an awful lot of customers but I felt really bad about some elderly people who had walked down specially to get their pension.
The Christmas stamps go on sale tomorrow (8th) if anyone wants to start stocking up. Some of my customers like to buy some every week till they have enough for their cards.
I've got another card to show that I made for Brenda to choose for Penny Black and More at Allsorts. I made  3 for her to choose from so this is the one that wasn't used. I think I'm up to about 50 Christmas cards now. Still a way to go though lol!

I'll try to get the other card posted tomorrow. I'm having yet another busy week. Tomorrow after work I'm going to a quiz night at another WRI. they have a quiz every two years and we always go. It's usually fun as long as it's not too difficult. Then on Wednesday it's our own quiz. As treasurer I buy the prizes, the raffles and the quizmaster's present and I've even done my baking. I think I just need to wrap up the prizes and qm's present and I'm organised! Then on Friday I'm going to see photos the minister and his wife took when they walked the West Highland Way to raise funds for new windows for our church. Not sure if I want to go out three nights out of five but I kinda feel I have to go out on Friday to see these pics.