Here he is then - the young man who kept us all waiting. I think he was worth the wait though. He was eventually born at 2.31 on Monday morning 13 days late. Catriona was induced on Saturday but her contractions were too strong and too close together so they had to calm things down a bit and things went very slowly on Sunday. She ended up having to have an epidural eventually. I thought she would have an easier time this time but no such luck. On Monday afternoon Poppy went to meet her little brother with Daddy. She loves him - luckily! My son-in-law took them from Dundee to Perth that afternoon and we managed to go down to Perth to see them that night after work. At less than a day old he is still very sleepy as you can see. On the way down in the car Poppy kept saying "baby sleeping mummy". I think she probably realises now that he does not sleep all the time lol! 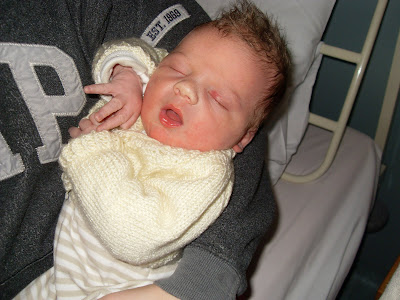 Catriona thought they would not get home till Wednesday but I got a text about lunchtime on Tuesday to say that they were getting home so they must have been doing well to get home so quickly after such a traumatic time for them both. My other daughter went down on Tuesday afternoon and came back on Wednesday and she is quite smitten in spite of the fact that she always said she preferred little girls. She is devoted to Poppy!

So this is his lordship with his mummy. He was almost 9 lbs and is quite long so the newborn babygros she took in wouldn't fit and she had to get daddy to bring in the next size. 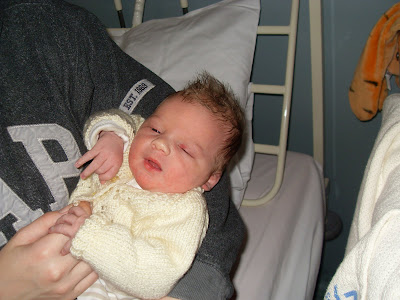 Not sure if you can see in the photos but he has very long fingers like his mummy. I couldn't believe when I went in how much hair he has. But Poppy had quite a lot of hair when she was born too. 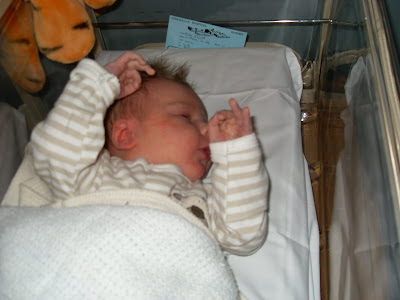 Catrion took off his cardigan when she put him in his little cot because she thought he was feeling warm. Poppy is like that - she hates being too warm! 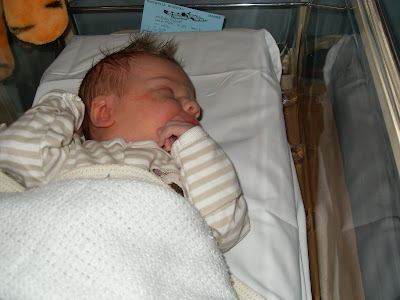 You can just see his Tigger at the corner of his cot. I couldn't resist it. I bought Poppy a Winnie the Pooh when she was born and she loves to take it to go to sleep. I hope our as yet un-named little one has a name soon. People are driving me nuts because they keep asking me what his name is. They couldn't agree on a name before he was born and since then they haven't had a minute to themselves to try to decide what to call him.