Meant to do this sooner but I got distracted visiting my favourite blogs! I made this card when I was crafting with my friend yesterday. I also made a bunny to hold Easter eggs for one of the grandkids. I have another one ready to put together so I'll show you them when they're finished. My friend found the templates and instructions in a magazine and she's made some already.

So here's the card. I'm quite early as it's for my (great) nephew's birthday in a few weeks time. 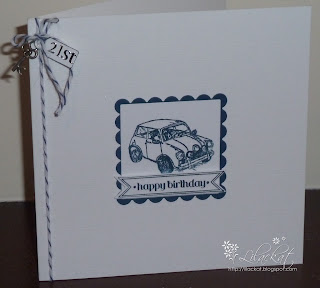 I stamped the Papermania image in Stampin' Up! Midnight Muse ink. The sentiment is from Stampin' Up!'s Bitty Banners and cut out with a SU Bitty Banners Framelits die. I added some twine from the Ribbon Girl a key charm and tag made using the SU Jewelry Tag punch.

Hope Donald likes it. I think it's probably plain enough for a 21 year old lad!

I think this card fits the following challenges :-

I've had a really busy day today! This was my day to help at Messy Church. We meet every third Thursday in the month. Our parish church serves two villages and so far we have met in the village further from me. Today we met in the village where I work. The layout was rather different as we used the two rooms downstairs as they are next to the kitchen rather than the main hall. This made it feel really busy. I think we did actually have more children. The mums from that village who don't drive/don't have the use of a car were able to join us but on the other hand some from the other village weren't able to come. I was supposed to be decorating egg people with the children. By the time I boiled 28 eggs and found all the bits and pieces to decorate them and made three samples it was nearly time to set off. Unluckily two eggs cracked in the pot and I dropped two in the sink. So we must have had 21 children making egg people. I felt really bad when one little boy came over with his Mum when the eggs were all gone. Luckily his sister had made one earlier so at least they had one to take home. I think the children really enjoyed decorating the eggs and they were incredibly inventive lol!

I spent the last half hour throwing unwanted stamps into a bag for the charity shop. There's nothing wrong with them but some of them have been in a drawer for years and never seen ink so I just decided enough was enough they'd probably never be used now. I have lots of other things I'm going to throw out. I can also use lots of stuff at Messy Church.

Now I'm off to catch up with my DT work and see if I can get some crafting done.

Thanks for looking and I really appreciate your lovely comments.