winter ones that is!

I don't think this is what I intended to make this afternoon but this is what happened. My friend came over and when I saw some of the Christmas cards she had made I decided to just use the embossed background and add a sentiment instead of adding a stamped image. I think it turned out ok. Well I hope so anyway lol! 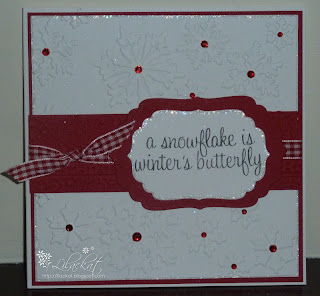 I'm off to check out Amazon for a book I've got my eye on. I'd also like to look at food mixers! Blame the Great British Bake Off. I love that programme lol! I've even been watching the junior version which is on a Sunday morning after my daughter told me about it. I received some books from Amazon after about a week of waiting. Yodel kept claiming that they had tried to deliver on 3 different occasions. Considering I was in yesterday at 6.14pm when they said they had tried I don't believe they were ever here. Not once did I get a card saying they had been. I complained to Amazon who were very helpful and today there was a card in my mailbox and the parcel was in my shed!! So here's hoping my next order is more successful. I would download the book to my iPad but the hardback version is cheaper so I'm going to risk ordering it.

Hope everyone is ok and not suffering after the awful weather we had at the beginning of the week.

Thanks for looking and hope to hear from some of you.