I often think that! I used to give my great nieces and nephews and latterly my grandkids too a book token every Christmas. Now most of my nieces and nephews have reached 18 and don't get a Christmas present any more. Only one is under 18 so I decided to make a gift card holder to put his money in. Not a book token any more as I realise he would probably prefer to put the money to something else! So then I thought I might as well make some for Poppy and Oliver too. The next thought was what to decorate the front with after all a 17 year old boy probably doesn't want a snowman or a santa! So here's what I made.

This one is for Lachlan. Hope a snowflake is not too yuk for a teenager. I took the photo last night and I think it looks a bit blurry but I can't get a better photo as I posted it with their Christmas card this morning! 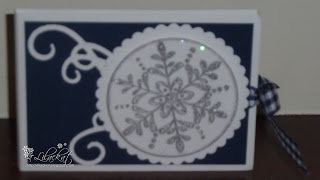 This one's for Poppy and it was definitely blurry so I took another photo. 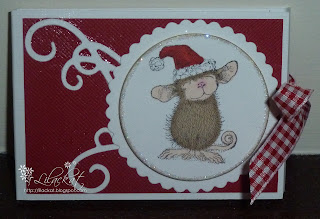 This is Oliver's gift card and my second attempt at a photo. 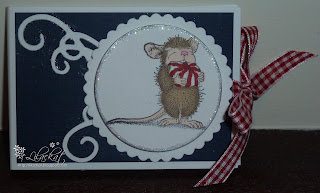 I should have taken a pic of the inside but I'm now a little short of time! I'm going out for a Christmas meal with the Guild tonight and I'm picking up my first passenger at 6pm. Our meal is booked for 7pm as some of our members are elderly. I usually take my neighbour but she's the lady who broke her hip a couple of weeks ago. She's now convalescing locally and seems to be doing well. Someone told me you only get two weeks there. Not sure if it's like a nursing home or a cottage hospital but I'm told it's really nice. Apparently she's determined to come home after that. She's very independent. Her son lives next door but he's a busy farmer. I'm sure she wants to have her family from children to great grandchildren for Christmas! Quite a crowd now. Her son looks after the turkey and the girls do the rest but quite an upheaval. But it's what she likes so they'll probably have to agree!

I went to look for a Christmas stocking for Oliver today. Poppy has always had one but Oliver has just had a gift bag. The ones at the garden centre at Inverurie were only £1.25 and really poor quality so I didn't bother. We would have looked in the town but hubby resented having to pay to park for a few minutes so we ended up coming home. I expect I could make one if I had some felt or material.

I ordered bike helmets for them last night after Catriona told me what website to look at. I sent a text to ask which one to get for Poppy and she replied "Poppy says" and she wants the one I had chosen for her already. So who's a clever Gran then? For some reason she wouldn't stay in her bed last night. Not like her at all. Oliver's had a cold so he's been asking to go to bed about 6pm. I expect they'll get a bit high the nearer we get to Christmas.

Not done much with my day off today but at least I've got my cards posted. Some handed out yesterday and some to hand out tonight. I'll take the rest to work tomorrow and hand them out to the rest of the staff and customers and friends who live in the village.

Not sure if I'll be too late to catch up later so maybe I'll try to do some visiting just now before I get ready to go out.