Hello everyone. Hope no-one has too much of this snow we've been promised! Nothing here at all. Bit frosty but that's about it. You might think it would be bad up here in North East Scotland but it's never as bad as you might expect. We are not far from the North Sea as the crow flies so we tend to be quite lucky. On the other hand when it is bad it is really bad!!!

Anyway here I am with the last of my cards. At long last. I finished them yesterday and sorted them all out for posting and handing out. I had totally lost the plot as I have handed out some on 4 separate occasions and posted one overseas. Unfortunately I forgot that I had another airmail one....sorry Michele. My excuse is that I've never had airmail ones before! Then I went to my labels and that was a mess. Since I had handed out some with handwritten envelopes I had some labels I didn't need so I decided to just do another set. But then my programme played me up so I gave up that idea and went back to last years and spent time deleting and shifting. Success - printed them BUT I had forgotten 2 so I added them on, deleted the rest on that page and.....yes of course I did....you guessed....I put the sheet in the wrong way round and got them on top of 2 others. Tried again and managed to get it right...at last.

So the envelopes are addressed, appropriate cards to certain people (well you wouldn't send a modern looking card to your husband's nearly 90 year old auntie would you?) and some even written. All I need to do now is finish writing them. Well no.....I still need a birthday card for a teenage nephew plus a card to put money in for his Christmas and also for his 2 brothers. I need a gift card holder for Poppy, a birthday card for a friend for 28th Dec and of course I still have to make special cards for my husband, son and younger daughter. Nearly forgot I still have to do my DT creation for TG.

Work is awful....on Tuesday I had to put big parcels outside my door in the PO.....I had a little corridor through them, plus 2 full mailbags with small parcels and letters plus a few on my floor. It got to the stage it was them or me and since I had to serve people it had to be me inside the PO!!!

I think I may be prevaricating here instead of making a card for a teenage boy LOL!!

So here are my last 7 cards. I think it's ok to post them as I'm sure my teamies at TG are much to busy to look at my blog! 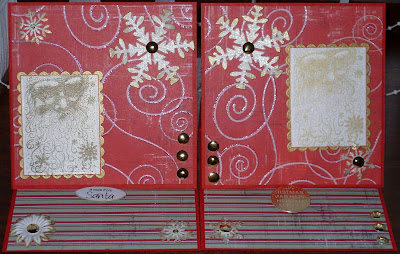 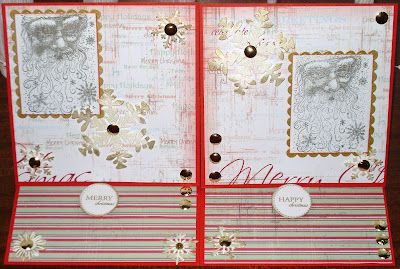 Now I am off to do that card and get some wrapping done for posting......and how could I forget....write the rest of my cards. I wouldn't mind but there are always some where you want to add a little note. Need to tell some people about Oliver and had a card from friends who said that they had just got a new grandson on 7th December so I need to send a congrats card...luckily I had a baby boy card so that saved making one.
Off to get busy and I'm sure I won't get a minute's peace at work so I can't leave any of the writing till I go to work LOL!!
Looking forward to the weekend,
Kat xx