Not sure if I need a Congratulations card for a Graduation any time soon but if I do I'm prepared with this little cutie.

When I saw that the challenge at Less is More is a one layer card and the subject is "A Film" I thought I was going to be struggling. It's not the one layer part that bothers me as I'm getting used to that now. No, it was the film part. I usually struggle with making a card to depict a film or a tune. Then I had a bit of a brainwave! My favourite ever film is "The Graduate." I remember seeing it years ago, and I won't say how long ago, with  my boyfriend. Trying not to drool over Dustin Hoffmann! After that I would have watched anything with Dustin Hoffmann in it and if I'm honest I still would. Don't tell my hubby though. 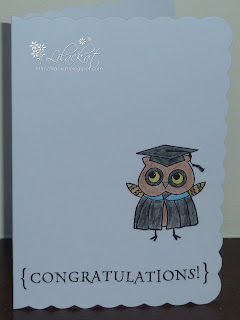 Isn't he cute. I added blue to his gown as that's the colour of the hood of my graduation gown. A wee while ago now.

I'm also entering the challenge at Crafting When We Can which is "At the Movies."

I have one or two more ideas for the LIM challenge so I might be back later in the week. Unfortunately I have some knitting I need to sew up for a WRI competition on Wednesday. I also need to bake for another competition. It's also our AGM and I'm feeling quite pleased with myself because my books are done and were exactly right first time. My boss is auditing them for me now and all I have to do now is sort out the points prizes. At our monthly meetings we have either one or two competitions and get points for a 1st, 2nd or 3rd. At the end of the year the member in charge of this works out who is 1st and 2nd overall and who has entered most competitions and got fewest prizes. We call this the endeavour shield now as most entries fewest prizes doesn't really sound very nice especially since there are only a few of us and it depends on the judge who might not know anything about what they're judging!

As some of you might know I work in my local sub-post office. The subpostmistress does not work due to health problems so I do everything that she would do. ie ordering cash, stock and stationery and doing the weekly balance. We were audited recently and to the auditors' surprise we were balanced to the penny. They told my boss that this never happened! She said that I liked everything to be right so she wasn't surprised. One of the auditors asked if I had worked in a bank and she said that I had. When I worked in the bank we had to balance to the penny every night before we could go home so I guess old habits die hard! My colleague was working that morning and they were pleased with how well she was doing since she has only been in the P.O. for about a year and a half. Needless to say neither of us got a nice bonus for our good work. We were both pretty chuffed though.

Enough wittering though, I'm off to have a nose around the blogs and see if I need to do any DT commenting.

Thanks for looking and I love to read what you think. So if you've got a minute to spare I'd love to hear from you.