I was supposed to be going on a day out with the WRI yesterday but it was cancelled because of the weather! My friend and I were a bit disappointed so we went out anyway! But even worse I discovered when I came home from my daughter's on Sunday that my camera had died. I thought I'd charged it but it wouldn't swithch on. So then I thought I'd maybe accidentally left it switched on. I think now the charger must be faulty. When I plug it in the light goes out after a few seconds. So I'm going to get in touch with the company I bought it from as the camera's less than a year old.

I tried a photo from my phone but it wasn't very good so now I'm trying one from a little cheapie camera. This is my second attempt at a photo, the first one looked a bit blurry to me. I've got so used to my Panasonic Lumix taking good photos in spite of me that I've ended up taking I don't know how many photos of this card before getting one that's not good but the best I can get!! 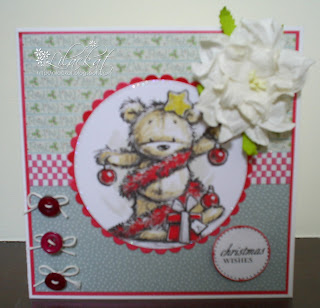 Now I need to go and check out a new cable for my laptop. Some of my cable looks a bit iffy so I think I'd best order a new one before it dies too and I'm left without a laptop. Wonder what the 3rd thing is?

I'm going to try to do some ironing before I go to work.
Catch up with you later and thanks for looking.